There’s a hidden diamond in “Man on a Ledge” 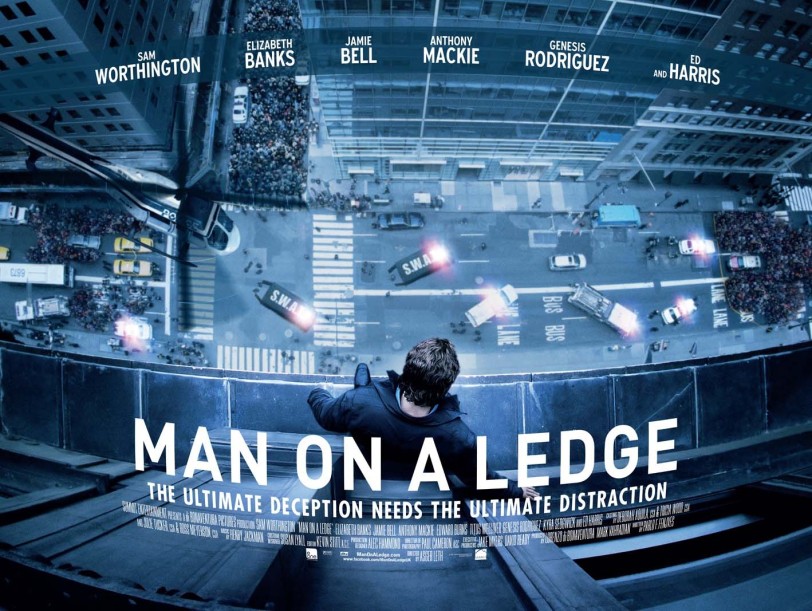 Well would you look at that?  Another movie panned by the major film critics for being too tidy or too outlandish, too contrived, convoluted or farfetched.  It seems Sam Worthington-led films have a hit and miss appeal.  Unlike The Debt or AVATAR, Worthington’s leading-role movie Man on a Ledge seems to have a few problems that other critics can’t stop beating with a thesaurus.  But beyond the reviews they put out about director Asger Leth’s debut narrative film is something audiences will find quite good – afterall, this is a movie – who ever said it needed to be an exact replica of real life?

Penned by frequent TV-Movie writer Pablo F. Fenjves, Man on a Ledge is a story about ex-police officer and convicted felon Nick Cassidy (Worthington), who maintains his innocence as he stands on a ledge of the Roosevelt Hotel in downtown Manhattan.  Cassidy has one demand, that his situation must be handled by police psychologist Lydia Mercer (Elizabeth Banks).  While Cassidy and Mercer communicate and she tries persuading him to come in off the ledge, the largest diamond heist in history is taking place across the street at David Englander’s (Ed Harris) jewelry company.

Without spoiling the plot, rest assured there’s a solid cast working to bring this film alive including Jamie Bell (as “Joey”), Genesis Rodriguez (as “Angie), Anthony Mackie (as “Mike Ackerman”) and Kyra Sedgwick (as “Suzie Morales”).  This cast works well together, especially Bell and Rodriguez, they have an energy that exudes charisma and is responsible for a bulk of the laughs you’ll find even with a crazy, “innocent” man on a ledge threatening to jump.  In fact, though her acting isn’t stellar, Rodriguez is an incredibly likable character, as is Bell, which makes their chemistry that much stronger.  Elizabeth Banks does a nice job in her role as “Lydia Mercer,” afterall, who doesn’t love a sexy blonde woman with a gun?  And Worthington – he gets the job done but he and Banks make a nice little on-screen thing as well.

Credit needs to be given where credit is due though, the screenplay is incredibly intelligent and suspenseful to the core – and no, not just because of the constant tension created by a man standing twelve stories in the air.  There are plot twists and turns constantly and even when you think you’ve figured it out – BAM – there’s another nice little surprise.  For this genre especially, it’s nice to have a story filled with “normal” language – meaning people actually would say some of this stuff, sure, there are some parts of the screenplay that don’t necessarily live up to real life standards (such as the police speak or protocol) but to the average person, this movie sounds natural, an excellent achievement.  And don’t worry, there’s above-average tension and action in some scenes, which is really refreshing as well.

Don’t believe everything else you read because the major critics missed the mark, Man on a Ledge is a tense, entertaining and often times funny movie that’s good for pure enjoyment and a good thrill.  Man on a Ledge is rated PG-13 for violence and brief strong language and runs 102 minutes.